Smartphones and the Path to Mobile Payments Adoption Just 100 years ago the first cross-continental phone call was made. Now, you're reading a blog post while listening to music streaming from the cloud and texting with your spouse about dinner.

As remarkable as it seems, technological innovation and consumer adoption don't happen by accident. It's extremely rare that a technology debuts and immediately jumps from A (a concept) all the way to Z (finished product with mass consumer adoption) without some major bumps along the way. No, every item you use throughout your day is the result of years of learning, failure, feedback, trial and effort.

This conversation is relevant to mobile payments. The basic technology exists (A) but is far, far from mass adoption (Z). Whether it's five years or 100, there is quite a bit that needs to happen before society at large begins paying with their phones. And some companies are already getting in the game.

We've mentioned it a few times, but the trajectory of mobile payments and mobile wallet adoption is going to curve upward only when the right mix of technology and value are found. That means useful, easy payment mechanisms combined with things typically found in a wallet - loyalty cards, coupons, IDs, etc.

The odds of that magic app (will it even be an app?) showing up tomorrow are very slim. It has to be built one piece at a time, while also grabbing chunks of consumers who will use it and provide smart feedback every step along the way.

Yes, mass adoption is still a few years off, but it doesn't mean companies have to sit on their laurels and wait for something closer to "Z" to show up. Adoption doesn't happen by miracle; it happens by creating value that people want in their lives. 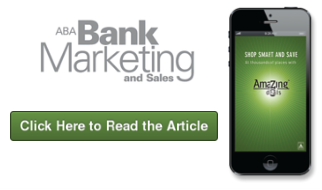 For example, take a look at the Zions Bank AmaZing Deals program. As featured in this month's ABA Bank Marketing and Sales magazine, the program is meant to reward faithful customers and incentivize top of wallet status for their Visa debit and credit cards. But there's a mobile element that's offering value to members of the program that's going to pay off in the future for the bank.

By building an app that offers mobile coupons and cash back offers at retailers in their footprint, Zions is helping usher their customers along from A to Z. They're placing their brand (and more importantly, value) in the hands of consumers at the point of sale. The payment element isn't there yet, but when it is, they're going to be in a great spot because their customers and merchants will already be habituated to look to their brand for value.

This is important because people just don't typically wake up suddenly ready to alter a significant aspect of their lives. It happens over time, and quite frankly, they have to be bribed to change.

The Smartphone: A Longer Runway Than You May Remember

Ask someone about what technological innovation caused the most disruption in the last 20 years and you'll most likely hear a mention of smartphones or personal computers.

As remarkable as both seem, each comes from a long line of failures and prototypes before they experienced mass adoption. Let's take a closer look at the smartphone. When Steve Jobs debuted the iPhone in 2007, it felt like a big leap forward. It seemed like something we'd never seen before, but in reality it was part of a lengthy progression:

That's a 25 year leap from the prototype to something everyone wanted to have. Notice that mobs of people didn't start coming in until all the "extra stuff" was added - it wasn't enough to simply make phone calls, but add a touchscreen, camera and a limitless selection of apps and games, and BOOM - 66% of the US population is walking around with smartphones.

Smartphones didn't jump from A to Z; it would be better characterized as a leap from T to Z. They continuously added more and more value until the relevance of the device was incredibly clear to the common person.

This is a long way of saying mobile payments have this journey ahead of them. The best way they can get closer to mass adoption is to begin adding value today. A finished, massively adopted product may be 30 years away or it may be five; the only way to find out is to start building out something people will love today.