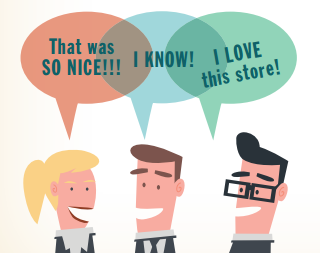 Look at the state of business today.

Employees walked out on their jobs in support of an ousted CEO that they really, really liked. There are massive protests on Wall Street (again). The NFL is holding press conferences to apologize for press conferences that weren't apologetic enough.

Clearly, the rules of business have changed. Consumers hold more power than ever before, thanks to the influx of online information and the influence of social media. The way businesses behave is now a central part of buying criteria, and consumers will hit the eject button quickly when shady practices are exposed.

But, there is a bright side to this new world: Once customers find a "nice" business, they'll reward that business with their dollars and loyalty.

Most businesses won't encourage any change in organizational behavior without some sort of benefit to the bottom line, which is understandable. The problem is shoddy, thoughtless or downright evil business practices have shown to be very profitable. Short-term, at least.

Long term? From the same research cited earlier, 93% of consumers say they're more loyal to companies that engage in corporate social responsibility.

The old adage about people telling 10 friends about a bad experience and just one or two about a good one? That's a bit outdated too, as we now know positive experiences are actually three-times more likely to spread via word of mouth.

Business as Usual is Closed

No one wants to fund the type of behavior seen on The Wolf of Wall Street or The Devil Wears Prada. There isn't much interest in spending with companies that are cruel to their suppliers and even crueler to their employees.

Those practices used to be hidden, but now they're often brought out into the light. And people react: according to recent research, 90% would stop buying a company’s products when they learned of its irresponsible business practices. A whopping 55% of consumers have boycotted a company!

Consumers would rather spend money with a company who pays fair wages, uses natural ingredients, and is helping to re-establish rainforests in South America. They like to get live people on the phone when they call in. They like it when companies show a bit of appreciation to them for spending their hard-earned dollars in their establishments. "Thank you" goes a long way with this crowd.

When the company behaves well, employee engagement rises, as does customer loyalty, and people want to be associated with the brand.

There's even more benefits to being nice, including your own personal health. Check out the benefits of being good, as well as a ton of examples of how other businesses are doing well by doing good, in Access' new eBook, "Nice Guys Finish First." Click the banner below for the free download, and let us know what good things your business has been up to!