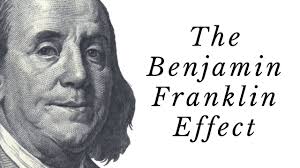 We’ve stated a few times that there is no true hack for customer loyalty. Loyalty is most often a result of a great product, served at a fair price, surrounded by constant engagement on an endless repeat cycle.

Every business is different, every audience segment has different desires and criteria for what and why they love. Earning that devotion is hard work.

BUT...there are small steps and techniques businesses can use to generate more affinity on granular levels. Details matter to customers, so even the small things a business can do can make a big difference.

Here’s one such “hack” that has a couple hundred years of evidence behind it.

Ben Franklin, one of the original American statesmen and scholars, knew the importance of relationships. He wisely understood that it’s better to have more allies than enemies, especially among those who wield a measure of power and influence.

After his election to the Philadelphia General Assembly in 1737, Franklin sought to earn the support of a powerful man who had openly and passionately argued against Franklin’s candidacy.

He didn’t shower the man with kindness or gifts or try to woo him with money.

He asked to borrow a book.

The man obliged, and a week later Franklin returned the book with a simple thank you note. The act caused the man to seek out Franklin for conversation, and soon he had offered Franklin an open-ended invitation for aid whenever needed.

As David McRaney says, “He couldn’t possibly have lent a rare book to a guy he didn’t like, so he must actually like him. Problem solved.”

Or, as Franklin stated it: "He that has once done you a kindness will be more ready to do you another, than he whom you yourself have obliged."

While still not exact science, the theory has been backed up several legitimate studies.

What Ben Franklin Has to Do With You

The takeaway here is fairly simple. You can accomplish a lot by giving things to customers, but you also stand to benefit by letting them come to your aid every once in a while.

Here are a few ways to ask customers for favors that will in turn boost their impression of your brand:


One final note: when a customer helps you out, don’t go overboard with thanks or appreciation. Giving something back to the customer risks turning the favor into a transaction, therefore lessening the impact. Show gratitude, just don’t go overboard.

All of these are good and serve as relationship-starters. Asking for help from customer isn’t a sign of weakness; it’s actually a smart, loyalty-building tactic that’s been around for nearly 300 years.